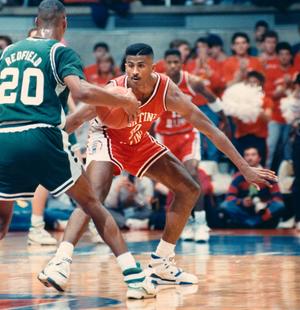 Can you believe it’s been 30 years since the Flyin’ Illini took college basketball by storm?

Lou Henson’s 1988-89 Illinois team might be the most famous to have not won a national title.

Michigan made sure of that in the semifinals at Seattle, with Sean Higgins scoring a late basket for a two-point win.

Michigan went on to beat Seton Hall two days later for the championship. Would the Illini have knocked off the Pirates? What were the players thinking?

You can get some of the answers thanks to the podcast series “Give Me Liberty.”

“Give Me Liberty” was scheduled to air throughout the basketball season. But there has been a hiccup. On Tuesday, Hubbard Radio St. Louis laid off Quinn and others because of budget cuts.

Temporarily at least, that puts a hold on “Give Me Liberty.” Quinn hopes the series continues.

“I love the Illini and I love that I got to do a show like this,” Quinn said. “It’s a great platform. People are listening to podcasts.”

During the three completed shows, Liberty talks about basketball past, present and future. And he discusses his life.

“This is something I always wanted to do,” Liberty said.

He first threw out the idea of a podcast on social media and drew a strong, positive response. The basic message: Go for it.

When he played for Henson in the late 1980s, Liberty was always willing to speak his mind.

“That’s the only way I can be,” Liberty said.

He has thoughts on the current Illinois team.

“Coach Henson didn’t win right when he got there,” Liberty said. “Let’s let him build his program with the kids that fit his style. Everybody I’ve talked to that are former coaches or coaches now, they love him. They say he will get that program back to where it used to be.”

I talked to Liberty on Tuesday afternoon. He had just landed in Las Vegas.

He was there to watch his nephew Javon Freeman play for Valparaiso against the Runnin’ Rebels.

“I might do a little scouting for them,” Liberty said. “Let (Illinois) know what they’ve got coming.”

Ready to say: “That can’t be true?” Liberty just turned 50. And he’s a grandfather.

Liberty, the state’s No. 1 basketball recruit at Chicago King as a high school senior, is now eligible for AARP.

Three decades after he became a basketball icon, Liberty still gets recognized. On an almost daily basis,

“People talk about that team everywhere I go,” Liberty said. “They’ll see me and say ‘I know your face from somewhere. Don’t tell me your name. University of Illinois. Flyin’ Illini.’ I’ll say ‘Yeah.’ It happens a lot.”

Liberty lives in Sarasota, Fla., where he runs Liberty Edge Basketball, a program that helps kids.

Liberty hasn’t been back to State Farm Center for a few years.

“The last time I was there Brandon Paul was still playing,” he said. “I would love to come back. I have nothing but love for the fans.”

Liberty has seen a photo of his bobblehead and wants one when they are available.

“It looks just like me,” Liberty said. “I’m real happy with it. Even to my ears.”

Liberty remembers the final moments of the semifinal, a stunning loss for Henson’s best team.

So, did Higgins gain an unfair advantage on his winning basket?

“I don’t think he pushed off,” Liberty said. “I think Nick was just so used to getting those rebounds. The ball just bounced wrong. It happens.”

To Liberty, the bad bounce cost the Illini the title.

“We know whoever won that game was probably going to be the national champs,” Liberty said. “I think we would have beat (Seton Hall).”

Thirty years later, we tend to focus on the good times. But there were also some down moments for Liberty.

He was a nonqualifier out of high school and had to sit out his first season at Illinois. Basketball, which had been so important to his life, was suddenly taken away.

“I talk about being an outcast because I couldn’t practice or anything with the team,” Liberty said. “It didn’t help anyone. I was rusty. It was hard for me because I was so used to playing basketball all year long.”

Who Should Join A Travel Basketball Team?