Listen To
Give Me Liberty on PodcastOne

Marcus Liberty was a consensus All-American coming out of King High School in the late 1980’s. You name the University, that school had Marcus on their radar. So how did he decide on attending the University of Illinois? Well that’s answered in this podcast. Another interesting part of the podcast is we find out the first coach who called his house, and caught Liberty by surprise.
Show More

Marcus Liberty and Patrick Quinn dive right in and talk about the current Illini’s loss to Georgetown and Patrick Ewing. The guys are impressed by Ayo Dosunmu’s early gameplay. Liberty discusses his senior year of high school at King High as the team faced LaPhonso Ellis and East St. Louis Lincoln High in the Class AA State Championship in 1987. Liberty also addresses what it was like to be a “Prop 48” player when he arrived on the University of Illinois campus.

Episode 1: Marcus Liberty Figures Out He Can Play Basketball & His Rise To King High School in Chicago

In the premiere episode we find the moment Marcus Liberty figured out he could play basketball, his brothers and father help guide him to the right school, and we also get Marcus’ take on Sonny Cox and the high school that helped put him on the All-American Basketball Map. 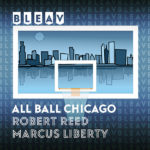 Listen To
All Ball Chicago on BLEAV

Today we pay tribute to Kobe Bryant quite arguably one of the greatest basketball players of all time. Kobe’s untimely death has shown the world that Men do cry, as Men and Women around the world found themselves vulnerable in the eye’s of tragedy.